Lord-Lieutenant is made Dame Commander of the Royal Victorian Order 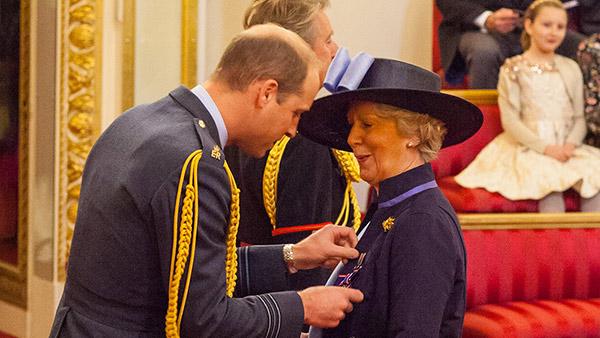 THE Lord-Lieutenant of West Yorkshire, Dr Ingrid Roscoe – who is a member of the Council of the University of Huddersfield – has been bestowed with the Damehood she was awarded in the 2017 Queen’s Birthday Honours.

At a Buckingham Palace ceremony conducted by the HRH The Duke of Cambridge, Dame Ingrid, who is also a highly-respected art historian, was made a Dame Commander of the Royal Victorian Order. This is an honour conferred at the personal discretion of the Queen, with no reliance on advice from the Prime Minister.

Founded by Queen Victoria in 1896, the Order is used to recognise a wide variety of services to the Sovereign. Dame Ingrid has been Lord-Lieutenant of West Yorkshire since 2004. The role means that she is Royalty’s representative in the metropolitan county, hosting visits by members of the Royal Family.

As an art historian, she holds a doctorate for her researches in 18th century British sculpture. She has been a university lecturer and editor-in-chief and co-author of a definitive dictionary of British sculptors. She is a trustee of the Yorkshire Sculpture Park, among many other voluntary positions and key roles.

In 2007, she was awarded an Honorary Doctorate of the University of Huddersfield. In 2012, she became a Dame of the Order of St John.